Plays - from the first to the latest 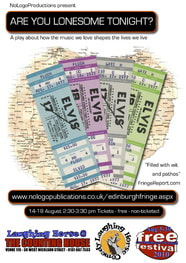 Are You Lonesome Tonight?  tells the story of two people with tickets for every night of the tour Elvis Presley was to have started the day after his death in 1977. The play debuted at the 2009 one act festival at the cornerHOUSE in Surbiton. It went on to win the Stagecoach Trophy for original work at the 2010 Elmbridge Drama Festival.

Continuing on the theme of music, love and death,  Heart Shaped Box, is set a few years after the death of Kurt Cobain and looking at how the star's suicide continued to affect the lives of two former students. The play was performed as a double-bill with Are You Lonesome Tonight? at Oxfringe 2010.

Written with Howie Ripley, the full length play Mistaken For Strangers about a poorly attended University reunion at the turn of the century, had a sell out run at Network Theatre, Waterloo in May 2010, and was followed by the production of an extended one-hour version of Are You Lonesome Tonight? at Buxton Fringe Festival in July, and Edinburgh Festival Fringe in August where dates included the 33rd anniversary of Elvis' death.

Completing the year, A Bridge Game Too Far reached the finals of the inaugural Ovation Theatre Awards, a competition where playwrights were asked to submit plays with a seven-minute running time. The play, based on the true story of a retirement community where playing Bridge is seen as a way of warding off dementia, was subsequently extended to 30 minutes and won the 2011 Roy Purdue New Writing Trophy, at The Orange Tree Theatre in Richmond, before a short run at Hampton Hill Playhouse alongside Are You Lonesome Tonight?

Andy was then one of nine writers to collaborate on KDC Theatre's Summer's Gone, a play spanning several generations in the lives of one family, performed at Barons Court Theatre in 2011. Are You Lonesome Tonight? was also performed at Brighton and Camden Fringe festivals that year. 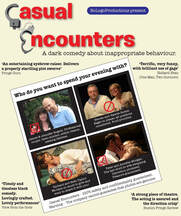 In 2012,  the original version of Casual Encounters, a play about wife swapping gone wrong, was written for SEDOS Theatre's 6 plays in 7 days event, and Going For Gold, where Brendan Connor bids for Olympic glory in a sport that requires no physical exercise, was performed at The Actors Centre by Plays with Words in their end of year show. Both plays were performed again in 2013. Going For Gold was selected for the 2013 one act festival at the cornerHOUSE and Casual Encounters was runner up in the 2013 new writing festival at The Orange Tree, where  Richard Bean, writer of One Man, Two Guvnors described the play as ‘terrific, very funny with lots of good gags. More than that, it made brilliant use of the gags to achieve and support the three act structure'.

Extended to 50 minutes, Casual Encounters went on to a professional production at Underground Venues, Buxton and Etcetera Theatre, Camden, where it achieved a sell out run in 2013, and Edinburgh Festival Fringe in 2014, where it had a 14 night run at Surgeon's Hall and subsequently transferred to The Courtyard Theatre, Hoxton. Also extended following the 2014 Commonwealth Games, Going For Gold was performed as part of the Green Arts Festival, Surbiton Festival and Kingston Comedy Festival that year. 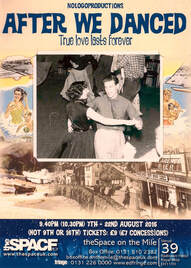 In 2015 After We Danced, a love story set in 1952 and 2012 and inspired by real events, enjoyed sell out shows and four star reviews in London and Edinburgh, Are You Lonesome Tonight? received its first US performance in Memphis, and Heart Shaped Box was also revived for one performance at the cornerHOUSE.

​2016 saw further performances of Are You Lonesome Tonight? in Memphis during the week long festival of events held to commemorate the 39th anniversary of Elvis' death. After We Danced enjoyed a sell out run at Buxton Festival Fringe, and Boxes a new two-act play became the first play to be performed at London Theatre Workshop's new venue in London's Leadenhall Market. Two further short plays, Welcome to Whitemore and Little Grains of Sand were also performed at the cornerHOUSE.

In 2017 an extract from The Golden Child, a work in progress full length piece, was presented at The Traverse, Edinburgh in their pre-view event as part of the Edinburgh Festival Fringe. The play went on to have a full online reading under the title Far Away, So Close, by New Works Playhouse in 2021. A new one act play A Beginner's Guide to Populism also premiered at The Cockpit, London as part of the Viola! Europe festival in November 2017.​​ 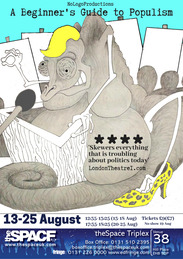 ​In 2018 A Beginner's Guide to Populism went on to enjoy highly successful runs at Buxton Fringe and Edinburgh Festival Fringe with 4 and 5 star reviews and sell out performances as well as being nominated for the New Writing award Buxton.  2018 also saw The Golden Child longlisted for the PapaTango award and Andy was also longlisted for the Mayfesto Writing Residency at Tron Theatre.

2018 also saw the first live performance of a 15 minute monologue called Make up as part of a new writing night organised by Blazing Hyaena in Edinburgh. The monologue was then selected by Breakwater Theatre Company for their Rough Cuts and Scratches competition in 2019. The play was one of two winners on the evening, and a longer version of the play was commissioned with mentoring support from New Perspectives Theatre in the East Midlands. Also in 2019, Are You Lonesome Tonight? had its third Memphis production as part of the Women's Theatre Festival of Memphis at the Evergreen Theater. 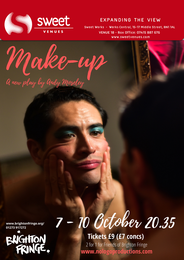 And so to 2020, which you might think would be a bit of a write off, all things considered, but no. Early in the year, Make-up was selected for the Highlands and Islands Touring Network Supported Programme. Slots were also confirmed at all major UK fringe festivals including a full fringe run at Underbelly Wee Coo. While Covid stopped live performances for most of the year, the full version of Make-up eventually debuted at Brighton Fringe after a preview show in Surrey in October, enjoying sell-out, socially distanced, audiences. The play was also selected for the Marsh Theatre, San Francisco's Marsh Stream International Solo Fest. Proving that geography is no barrier to online theatre, the recording of the San Francisco show went on to be part of Melbourne's Digital Fringe in November.

Make-up has continued to be performed across the UK throughout 2021 and 2022, with runs at Buxton, Manchester and Edinburgh Fringe festivals where it has received four and five star reviews and nominations for best actor, best production and best LGBTQ+ show. It has toured cities and rural venues in Scotland with funding from The Touring Network and North East Arts Touring, and a live recording of the show was part of the Unbreakable Festival organised by Pro:Act Theatre in Kyiv to raise funds for Ukraine in August 2022. Further dates are lined up for 2023.

Andy is currently working with Ukranian playwright Ira Serebriakova to bring a new play written by her to the UK in 2023.