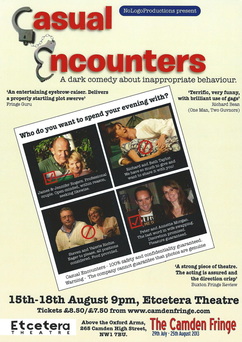 James and Jennifer Rogers have been seeing a marriage guidance counsellor. When she tells them they should try something new, James decides this can only mean one thing - wife swapping. Not that he’d want the neighbours to know, and to keep his new hobby a secret he’s been trawling the internet to find a suitable couple for their first causal encounter.

What he and Jennifer haven’t realised is that not everyone tells the truth online. They might be about to find this out the hard way when Peter and Annette Morgan enter their house.

Casual Encounters was originally written for SEDOS Theatre's 6 plays 7 Days project, where writers met actors one Sunday, and then were given till the following Thursday to write a play for them. Directors and actors got together on Friday and the plays were performed on Saturday. The play was voted runner up in ArtRichmond's 2013 new writing festival at the Orange Tree, Richmond. The judging panel, including Richard Bean, the award winning writer of One Man, Two Guvnors, described the play as ‘terrific, very funny with lots of good gags. More than that, it made brilliant use of the gags to achieve and support the three act structure.’

Extended to a full one-act play it was performed by NoLogoProductions (and directed by Andy Moseley) at Underground Venues, Buxton in July 2013, and went on to achieve a sell out run at Etcetera Theatre Camden, in the 2013 Camden Fringe Festival. After a highly successful two week run at TheSpace@Surgeons Hall at the 2014 Edinburgh Festival Fringe, the play was picked up by The Courtyard Theatre, Hoxton and transferred to it for a limited run in September 2014. The play has also been performed at The Rowing Club, Henley, and London Theatre Workshop by NoLogoProductions, and the Rosemary Branch Theatre, Islington by KDC.

Casual Encounters is available for amateur production. The script can be purchased from Smith Scripts
​
Reviews of Casual Encounters
​
'An exploration of marriage (the institution), relationships (being married), gender roles, class, mores and more. Each is interwoven into a strong piece of theatre. The acting is assured and the direction crisp. It works very well. I can certainly recommend it to you' Buxton Fringe Review

'All the principal actors are strong. The script delivers a properly startling plot swervetogether with a few  interesting thoughts about the different types of hold we all have over each other. An entertaining eyebrow-raiser, risqué enough to be memorable. I’m glad I gave this one a whirl'  Fringe Guru

'Simultaneously timely and timeless. Lovely performances from all the five cast members. All led by a diamond-sharp direction and story structure.' View from the Gods