﻿AFTER WE DANCED
LONDON, EDINBURGH, BIRMINGHAM and BUXTON 2015 -16 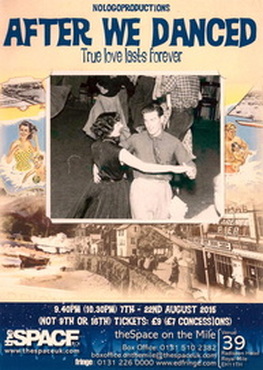 TRUE LOVE LASTS FOREVER
Fran and Finn are young and in love in the summer of 1952. When they meet on the beach it is the start of a relationship that will define both their lives, and a new world of possibilities open up for them.  What they don't realise is that it's to be the only summer they spend together, and after it ends it will be almost sixty years before they meet again.

In 2012 their children meet each other. John is happy that his dad has met his soulmate again. Brad is less enthusiastic about the person taking the place of his father. For his wife, Fran and Finn's story may be a message about missed opportunities and the chances you live to regret.

As past and present collide, only the future is up for grabs.

After We Danced enjoyed sell out London previews in Surbiton and Fulham, ahead of a two week run to packed houses at Edinburgh Festival Fringe, and further performances at The Old Joint Stock Theatre, Birmingham in 2015. In 2016 it had a sell out run at Underground Venues for Buxton Fringe.  The play is available for amateur production. Scripts and licences to perform can be obtained from Smith Scripts here.

Reviews
If you are looking out for a play that has warmth, examines the human condition, in a well defined, but unsentimental way, with some fine lines and performances from talented actors, then this could be the new play for you. The writing, and the story are strong enough that I would hope that this play would have a place in the repertoire of many acting companies across the country.' Remote Goat

After We Danced is sweet and romantic but doesn't veer towards the saccharine; instead it delivers a satisfying, well-rounded tale that is uplifting and believable. The strong cast inject a sense of energy and innocence into Andy Moseley's carefully balanced script' British Theatre Guide

This is what some audiences might call (with relief) a “proper play”, with costumes, simple sets, well-chosen music and film footage adding to the period feel. A production with real heart, proving gentle, touching and amusing by turns.' Buxton Fringe Review

A light romantic confection with a hopeful gleam in its eye and it achieves exactly what it sets out to do. Charming, well-acted, well written and unfussily performed. Exactly the type of play you can imagine being in the canon of am-dram companies for many years to come' TV Bomb

'A neatly structured tale with nice attention to detail that captures both the period’s feel and sensibilities, the romance has a gentle charm and youthful vivacity. A good traditional piece of theatre that is memorable' Edinburgh Guide